Thank you to all the families who took part in the Sciennes' Big Cycle to school on Wednesday 20th June. An amazing 327 children (half the school!) pedalled from King's Buildings to the playground. The sun shone and it was quite a spectacle, as can be seen from this video and photographs from Chris Hill.


Primary Five pupils from Sciennes Primary School also got the chance to try out the new cycle route from the King’s Buildings to the school, as part of Bike Week 2012.

They were accompanied by teachers (and keen cyclists themselves) Shona Pearmain, Iain Kearton, and Fiona Barker, Business Manager Angela Christie who arranged the events, as well as Lothian and Borders Police Cycle Cops PC Leon Malinowski and PC Andy Couillard. 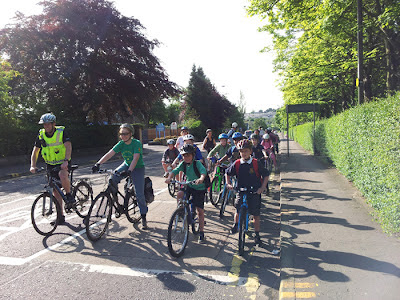 P5 pupils have also enjoyed cycle training over the last few weeks, culminating in a cycle ride in the Meadows, as shown in this video from Chris Hill:

Email ThisBlogThis!Share to TwitterShare to FacebookShare to Pinterest
Labels: Cycling