ECO - Plant for the Planet

CLICK ON THIS LINK TO VIEW PHOTOGRAPHS FROM THE EVENT

On Wednesday 10th April, Eco Teachers Alison Mackintosh, Sandra Gregson and Iain Kearton with nine Eco Pupil reps from P5-P7 and pupils from P5B welcomed 4 Eco pupil reps from Tollcross, James Gillespie's, Preston Street and Bruntsfield Primary schools to a Plant for the Planet event at Sciennes. Sebastian Hemmann and his team of three assistants (Sjoerd, Theodora and Dagmar) led a day of activities for the children, designed to raise awareness of climate change, which culminated in the planting of cherry, rowan and birch saplings in our Wildlife Garden, opposite the playground.

Each participant was issued with a t-shirt, book and certificate. The project began five years ago and was initiated by a child called Felix. It has since grown into a global movement, supported by major world figures and organisations, with the aim of planting a billion trees in each country that gets involved. Children are empowered as ambassadors for change and tasked with spreading the message on how to combat climate change by taking practical steps. The initiative is supported by City of Edinburgh Council and has been endorsed by the Lord Provost. The first event in Edinburgh was held at Davidson's Mains Primary in March 2012, the second at Duddingston Primaryand the third at Sciennes Primary. The intention is that schools who send 3-5 pupil participants will in turn offer to host their own event so that the initiative expands throughout the city.

The saplings we used were generously provided for free by the Woodland Trust as part of their initiative to plant 6 million trees for the Queen's Jubilee. Trees can be planted between November and April.

Many thanks to the P4P Team and to the schools who released staff and pupils to be involved. 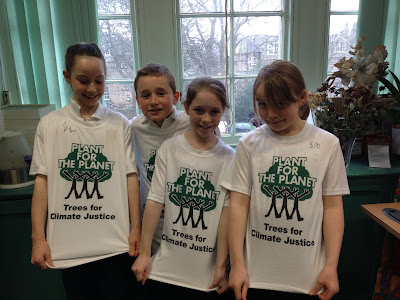 Please note that there are still places available for the very successful afterschool club "Earth Calling" run by Angus Egan and Sebastien on Thursdays. Contact school for more information.
Posted by Ms Gallagher at 23:43

Email ThisBlogThis!Share to TwitterShare to FacebookShare to Pinterest
Labels: Eco